Waiting for the PS4 I realized that (1) it's still a while until it arrives, (2) it'll probably be a bit expensive at first and (3) there won't be a huge number of games for it. Conclusion: had to buy a PS3, and play some things I missed.

Having been a PC-only gamer, I had a screen and great headphones. Note: not a TV; a computer screen with no speakers built in. I asked about the video, and got a DVI-HDMI adapter. Simple. Surprise: I noticed after all else was et up that there's no jack output on the thing. There are plenty of other outputs though. If you want 5.1, you can use the HDMI or optical digital output. If you want 7.1, you need to use HDMI. I just wanted my headphones to work, so I used the simple RCA output (which supports only stereo).

In this case, an RCA-jack adapter is all that's needed to fix the situation. Slight complication: both the cable coming out of the PS3 and the headphone/speakers are male. So throw in a female-female coupler, and all is well. To make things a tiny bit more complicated, there are two varieties of the adapter.

For this, you'll need once female-female jack to connect this to your audio device. 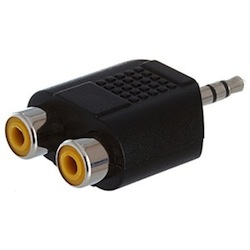 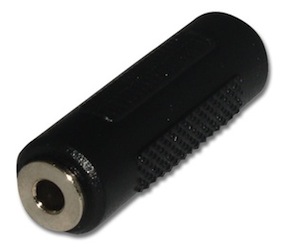 Here two female-female couplers must be used between the RCA-jack adapter and the RCA outputs of the PS3. 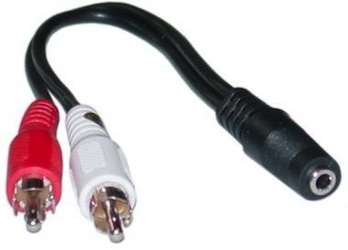 Whichever you use, you'll need to connect the correct RCA outputs from the PS3 to the correct sockets. Red always is the right audio channel, black or white is always the left channel. Yellow is video, you can ignore it (or use it for video output, of course). After all that is done, you'll need to set the audio output to "Audio Input Connector / SCART / AV MULTI" as described here, and you're all set. Note that there's no system-wide volume control, but the games I've played so far all had their own.